If you’ve been in retreat, lying low, feeling“down and out,” or suffering from depression or some kind of failure, the Judgement Tarot card, when it appears upright in a position indicating the future or the final outcome of a Tarot spread, offers hope.

Many faiths believe that the world will end with God’s judgement. That day, God decides which souls will inherit the kingdom and which are not worthy. Some faiths, including Roman Catholicism, believe that on that day all the dead will rise to be judged. Other faiths say the dead were judged at the time of their deaths, and the Last Judgement will occur after the Second Coming. 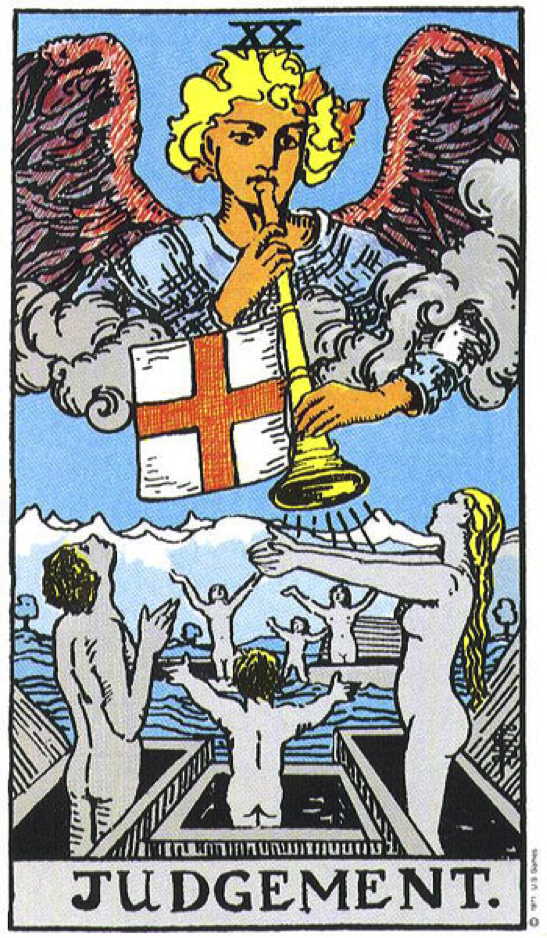 This card in Tarot does not prophesy the end of the world, nor does it predict that you will be judged on Judgement Day. Tarot is about life, not death. So what then does this picture—showing Judgement Day as it is described in sacred books—mean in the context of life?

The Tarot exists to tell us stories about our own lives and the direction we are headed in. That’s how Tarot cards can predict the future.

The famous Tarot cards with names, such as The Fool and The High Priestess, are part of a 22-card subset of the Tarot deck called the Major Arcana. They are the most important and powerful cards in the deck. These 22 cards, in order, tell a story, too, about how a human life proceeds. The Major Arcana cards are numbered zero to 21. Card #0, the Fool card, indicates not foolishness but the state of pre-creation. Then the spirit assumes a form, a body, signified by Card #1, The Magician, who creates matter out of thin air. 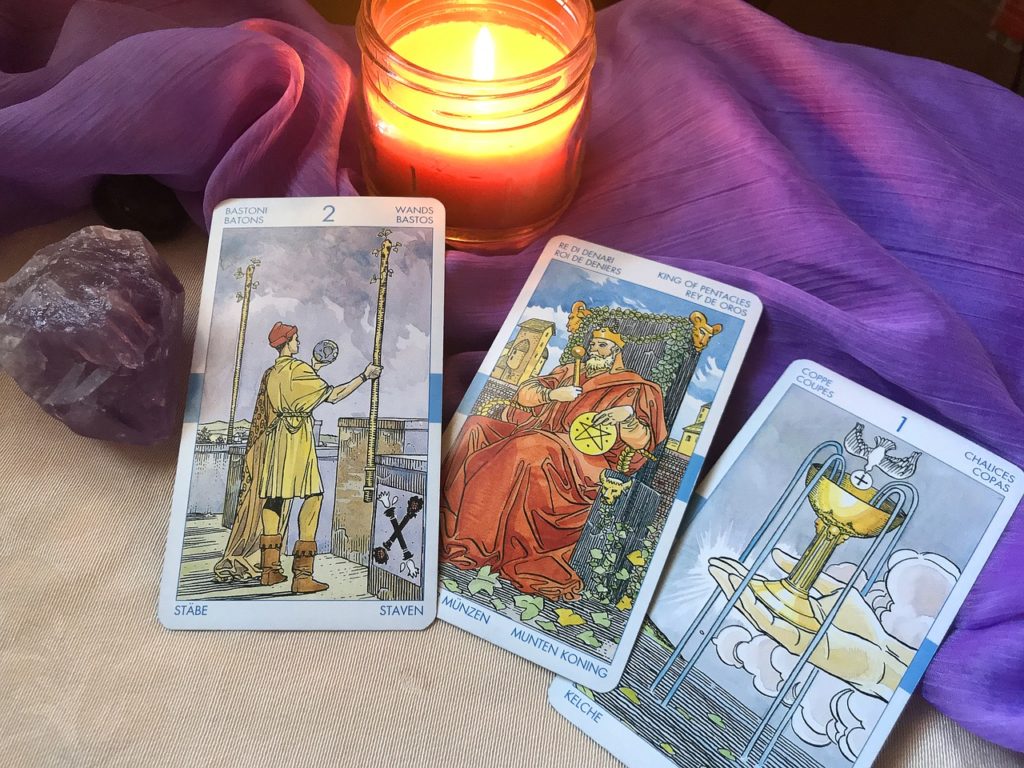 And so the human being grows and develops, complete with important people, important moments, uncertainty, and so on. The Judgement card is Card #20, second-last in the Major Arcana. (Card #21 is called The World. Some readers call it The Universe.) When this card shows up in the future, the Seeker is very near the end of something and about to be offered a second chance.

People who don’t believe in second chances will tell you there is no such thing. But life does offer second chances, and with this card in your spread, you are the lucky recipient of a chance to “rise again,” to re-create yourself, perhaps through a new career or new faith, a new place to live, a new stage of life, or restoration of health. This card challenges you to start over.We see this card often for Seekers who’ve finished years in a certain career and are ready for a change, but not retirement. This card can represent a high-level professional or technician who joins the Peace Corps or becomes a public-school teacher. Or it can represent the public-school teacher who decides to practice law or to enroll in business school to learn banking. In all cases these people are seeking fulfillment or realizing dreams. That’s what life is about.

The Judgement card can also be read as “the wake-up call.” The context of the reading reveals what the Seeker should “wake up” about. Or, if this card appears in a past position, it reveals when the Seeker received the wake-up call, and whether the Seeker listened. Gabriel is blowing his horn. Are you too preoccupied to hear it?

The card pictured above is from the most popular Tarot deck, the Rider-Waite-Smith deck, and it’s not a pretty card. Nobody is thrilled to see naked dead people rising from their graves. 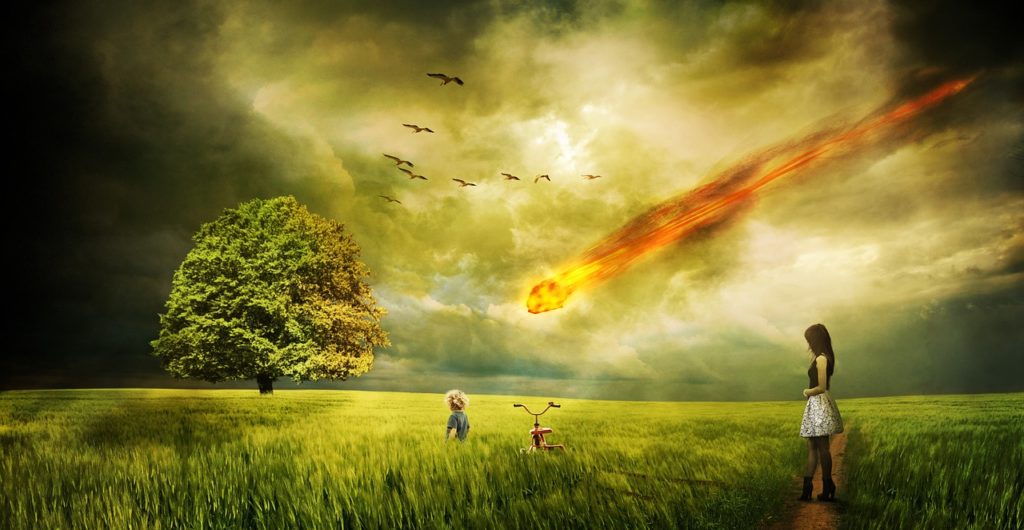 No one eagerly anticipates the Day of Judgement or the end of the world, when Gabriel—the winged angel whose image on the card is far larger than the images of the people—will appear out of the blue, blow his golden horn, and everyone will have to pay attention, because this is the climactic moment.

The white flag suspended from Gabriel’s trumpet has a red cross with four equal arms. This symbolizes equality. When this card appears upright, the judgement or wake-up call the Seeker will receive will be fair, or it will be fair warning.

Reversed, the Judgement card is unfavorable in any position. This can signify a wake-up call that went unheeded. It can also indicate a legal or moral judgement that was, or will be, punitive, prejudiced, or otherwise unfair, or a courtroom judgement overturned. 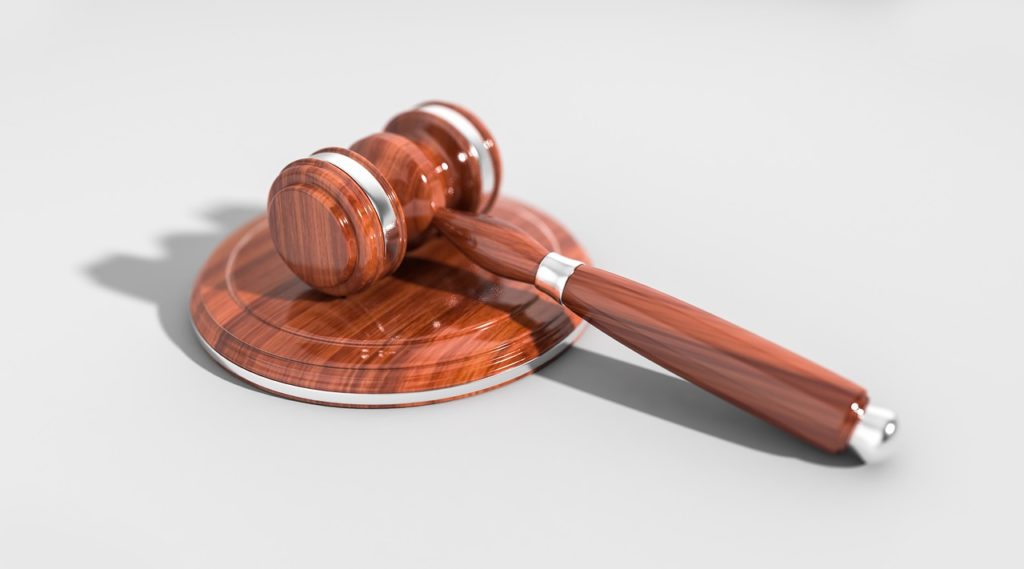 More simply, Judgement reversed can show laziness or unwillingness to meet a current challenge that could lead to a higher position or even heroism and glory. “Seize the day” is always a good motto. We live each day only once.

If this card appears early on in the reading, the Seeker, or someone very close, is or has been “judgemental” in the bad sense. We all need good judgement. Sometimes despite good intentions we judge incorrectly, and other times we judge automatically, or without consideration. This is not only unfair to whomever we judge, but it shows a lack of respect for our own intelligence or greater self, or to the standards of our faith.

The Judgement card calls us to our greater self and higher love. The opportunity is there.