The Notre Dame Cathedral in Paris is one of the centerpieces of the great city and one of the symbols of France: a magnificent work of art, begun in the 1100s, standing since the 1300s, and restored in the 1800s. It has seen hundreds of years’ worth of worshipers and tourists, Roman Catholic and not, who traveled from every continent to stand in the Cathedral’s great nave and admire its rose window. It was a spiritual experience no matter what their faith or non-faith. Certain sites on Earth are holy, and the Notre Dame Cathedral is one of them.

We say “is” – because despite tremendous damage and the collapse of its tallest feature, the spire, the stone shell of the cathedral still stands despite a fire that began on the evening of April 15. According to CNN, the first report to the Paris fire department occurred at 6:20 p.m., Paris time, after a priest saying Mass noticed smoke in the air. The spire collapsed at 7:05 p.m. The blaze was brought under control before midnight but was not considered extinguished until the next morning at 9:30 a.m

Will a horoscope chart for the first alarm’s time and place reveal the fire’s cause and aftermath? Investigators do not yet know how the fire started, but they think it was in the spire and first reasoned that its ignition was accidental, given that the 300-foot-tall spire – made of wood — was covered with scaffolding for maintenance. Any structure more than a few decades old requires maintenance, and the bigger and older the structure, the more likely it requires continual care. Scaffolding is not unusual on historic structures, and people work on scaffolding.

Maybe church spontaneously ignited? Did someone light a cigarette and drop a match? Could the devastation have started with an arsonist, maybe one involved with extremist politics, or more than one arsonist? We know it was not a lightning strike; in Paris, the weather was clear. Maybe a serial arsonist is targeting the world’s most beloved buildings?

Starting the next day, authorities were interviewing people who were on or near the scaffolding at that time. Two companies had workers on site during that day, but it was after working hours, and one boss denies there were any workers there at that time.

Our Lady = Virgo, the Virgin

The astrological chart above is a map of the sky and the planets at the time and place of the first alarm. The fire – which rapidly spread – had of course begun minutes before, but that does not change the chart very much. Within the span of one hour before the event and one hour after, the chart would be virtually the same – with one important exception. The chart’s most important point, the ascendant point, at the chart’s 9:00 position, is at 0 degrees of Libra. That degree changes every four minutes. Just four minutes earlier the ascendant point would have been in the last degrees of Virgo, the Virgin.

That seems significant, because the Christian cathedral was dedicated to “Our Lady,” St. Mary, who as a married virgin miraculously gave birth to Jesus, the Christians’ messiah. The Moon was also in Virgo on that day, in the chart’s House 12, house of spiritual and psychological mysteries and the unconscious mind. Virgo governs mindfulness and meticulous work and craftsmanship, such as that required on a building 600 years old. It would have been a good day to do such work on a house of worship. But it seems that work had ceased for the day.

The only aspect the Virgo Moon makes is, strangely, a favorable aspect to Uranus in House 8, house of bodily mysteries such as attraction, sex, birth and death. Uranus governs sudden, unpredictable events – surprises or accidents. But was it an accident? Could it have been simply spontaneous, an act of God?

In addition, we have the planet Mercury in the zodiac Pisces at the descendant point in the chart, opposite the ascendant point. That means Mercury was in the process of setting. The descendant point of any chart is located between House 6, house of employment and service to others, and House 7, house of partnerships. It’s a transitional point, often linked to serious challenges and the need for assistance. Firetrucks was slow to arrive because it was Paris’s rush hour.

Mercury, in astrology, represents mental processes and intelligence. These workers were specialists who had worked on restoring other precious buildings. When Mercury is in Pisces, mental processes tend to “zone out” or fill with fantasies or mischief. If the fire can be traced to one person, that person wasn’t thinking logically but emotionally.

Shouldn’t we look at the fire signs, Aries, Leo and Sagittarius, in the chart when interrogating a fire’s cause? When we do, we see the Sun in Aries, approaching a conjunction with erratic Uranus in Taurus, but, technically, it was not yet in conjunction.

Had Uranus and the Sun been in conjunction, we might confirm at once that the fire was the work of a deranged person or a prankster – but the workers entrusted with cathedral maintenance were distinguished craftspersons, not kooks or inexperienced people. It must have been somebody else, or a mechanical problem. News sources are currently blaming a short circuit in an elevator that took workers up the spire, but French detectives say (as of April 21) they are still looking into every possible cause. Investigation is made difficult by the extensive damage.

The chart has no planets in the fire sign Leo. Jupiter, at the nadir or root of the chart, was retrograde in ideological fire sign Sagittarius, in near-perfect trine aspect to the Aries Sun. Jupiter in retrograde is always less helpful and generous than normal. It’s in House 3, the house of communications, so communications were under some pressure. But the trine between the Sun and Jupiter is still favorable. This might have helped save much of the cathedral’s stone “shell” and its relics and artworks.

Mars is the aggressive, heatedly energetic, masculine planet, and in this chart Mars is in Gemini, the sign that’s impulsive and clever but also selfish and scatterbrained. The planet happens to have been in House 9, house of education, travel, publishing, news and religion. This could be read as a fire in a church – the news of the fire spreading “like wildfire” through the media and the world, complete with dramatic, fiery photos. 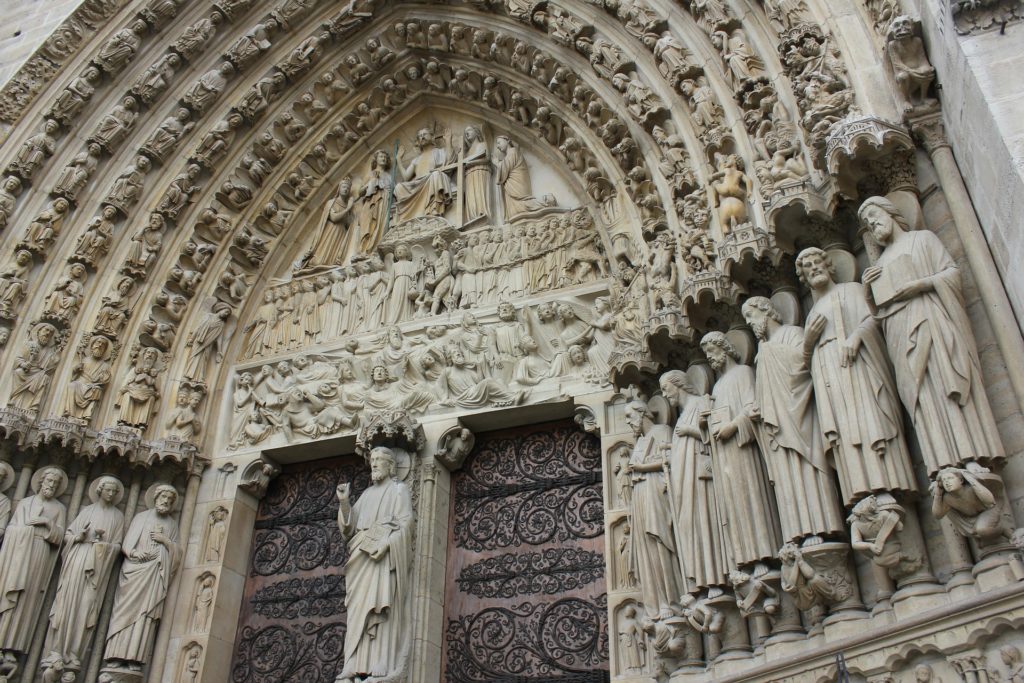 But the sign Gemini is also “intercepted,” meaning it makes no contact with any cusps. This indicates a secret hard to tease out. The short circuit in the elevator was announced (by whom?) as the cause even before investigators listed every possibility. Why? Boxed as it is within the borders of Gemini, Mars did not have the destructive power it might have otherwise had, and for that we are lucky.

Could this have been a terrorist act? Terrorists usually use bombs, not arson. Yet the fire took place, sadly, during the holiest week in the Christian faith. If that’s coincidental, it’s quite a coincidence. If a terrorist motive was confirmed, authorities fearing public reaction could agree to keep that secret and allow the public believe something else. Or it might have been a contractor’s mistake too embarrassingly simple to publicly admit.

Will It Be Rebuilt?

Guaranteeing that this damage to a beloved property would be a world event was Pluto in House 4. This planet of destruction and renewal was in the house of foundations and heritage, and Notre Dame, architectural and artistic masterpiece, is part of the cultural heritage of the French and of the human race. Saturn, the planet of discipline, sadness and resignation is approaching a conjunction with it, one that will affect us all. The conjunction, in Capricorn, will actually occur in early 2020. Capricorn, the “treasury” sign, learns from and treasures experience. Safety for the building and visitors, at present and in the future, will be the rebuilding project’s top priority. The sign Capricorn also rules cash.

Will they really rebuild? Sure! The foundations are still standing. France’s president said they will rebuild! French billionaires have pledged millions in funds, and smaller donations are pouring in. The disaster brought humanity together as, dismayed, we watched Notre Dame burn – and then saw it rescued.

But did this tragedy have to happen? Yes, Pluto says it did, as a harsh lesson, made even more intense by the coincidence that it occurred during Holy Week. Astrology calls it a lesson because between Saturn and Pluto sits the Moon’s South Node, politely called “the tail of the dragon,” but astrologically the pit of pits, the rock-bottom we must wallow in until we learn. The lessons are: treasure culture and tradition; don’t ignore it. Pay attention to history; don’t ignore it. And some treasures belong to all humanity, a reminder that there is such a body called “humanity,” not just a bunch of warring tribes.