The most popular Tarot card deck in the English-speaking world is the Rider-Waite deck, conceived by occultist A.E. Waite, illustrated by artist and fellow occultist Pamela Colman Smith, and published in 1910 by William Rider & Sons of London. To honor the artist, it’s now often called the Rider-Waite-Smith deck.

For about $14 you can own this basic deck. Most Tarot textbooks use it. Even so, the Rider-Waite-Smith deck now has multiple variations, including a Quick & Easy version with each card’s meaning printed right on it, for students and those who want to announce to the world their beginner status in an art that requires experience above all.

Smith’s original illustrations are lost, and the plates they were printed from destroyed in the bombing of London during World War II. But the illustrations are now in the public domain, as are any works 70 years after the death of the artist. New variations on these illustrations can be copyrighted. The original deck’s images are simply enhanced with deeper colors or a “halo” effect with artistic shadings that make the images look more like paintings than drawings. They’re called the “Radiant” and “Universal” Rider-Waite decks, plus there’s a “Centennial” version. Some readers prefer the variations. I like the classic version’s strong lines and vivid primary colors.

At least I thought it was the classic version until I saw a replica deck of the 1910 originals. Smith’s original coloration is more somber, with lots more gray and beige. The lively “classic” deck was first published by U.S. Games, Inc., in 1971. That’s the year Tarot came up from underground.

It used to be that those wanting to learn Tarot joined a secret society, like The Order of the Golden Dawn, of which Waite and Smith were members. Today Tarot is out in the open and hundreds of decks of Tarot cards are in print. Tarot readers who want to paint, draw, or collage their own decks can buy a deck of blanks.

There are 78 cards in a real Tarot deck. Fifty-two of them are much like playing cards, with four suits numbered from aces to kings, except there are 14 to a suit instead of 13, because of an additional face card mostly called “knights.” The suits are typically called Wands, Cups, Swords, and Coins; the Coins are also called Pentacles, the wands sometimes called Staves, and so on.

These cards don’t usually have names or labels, only images, so their meanings must be memorized. In fact, the oldest Tarot cards weren’t labeled at all; only the initiated knew the names. Rider-Waite labels its face cards, which Tarot calls “court cards,” and also the Major Arcana cards—the 22 trump cards usually featuring one primary figure, such as The Emperor or The Sun. “Major Arcana” means “greater secrets.” Those 22 are the cards most associated with Tarot.

Rider-Waite also comes in sizes from as big as a hand to as small as a thumbnail. The “Tiny” deck’s thumbnail-sized cards, fragile as postage stamps, fit in a small plastic case you could carry on a keychain. The hand-sized Giant deck is useful for public readings, such as at psychic fairs, but difficult to shuffle. The most useful size is a deck somewhat larger than the standard deck of playing cards. An “emergency” deck measuring two inches by three stays in my car. It’s important in Tarot readings that the client, also called the Seeker, see the illustrations. Their symbolism is what fascinates people, and even non-believers can’t help being moved by it. 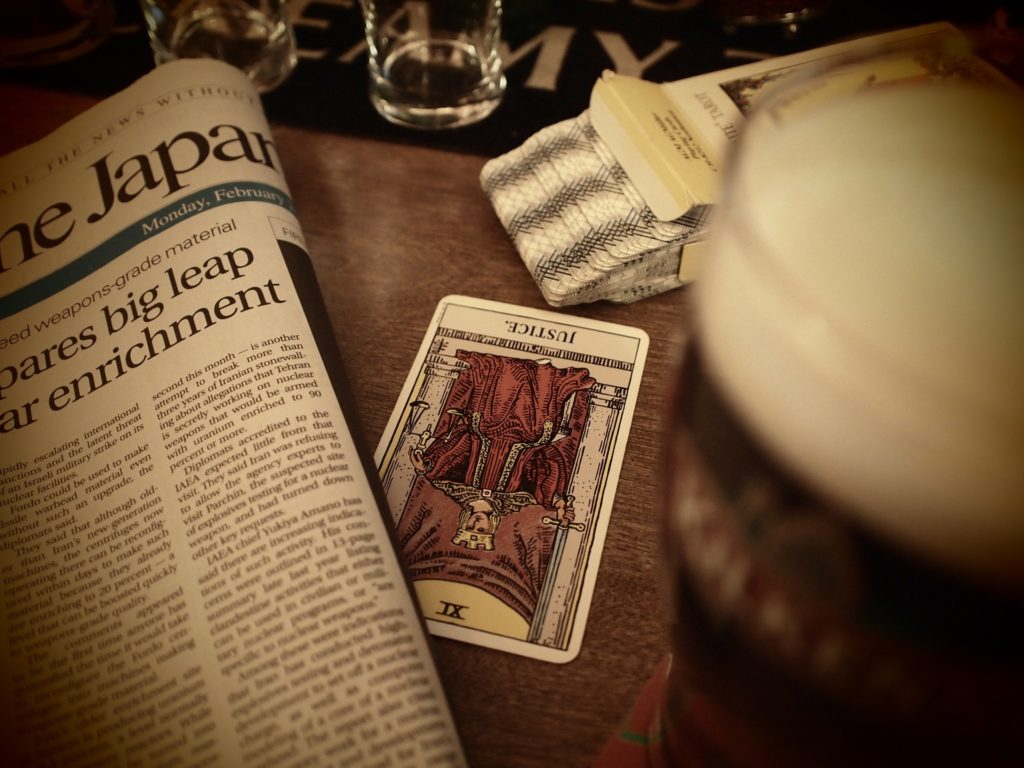 While creating her Tarot drawings, Pamela Colman Smith did research at the British Museum and took inspiration from older decks, such as the Tarot de Marseille, a medieval deck first printed from woodcuts. These images from the past look eerie to us. Even so, that’s not the oldest deck. From the middle 1400s there survive a few cards from an Italian deck now called Visconti-Sforza, after their sponsor, Duke Visconti of Milan. He had three different sets hand-painted, apparently by three different artists. “Tarocchi” was a popular card game in Italy and later in France, where it got the name “Tarot.” Its use as a divination tool began in the 18th century. Do not believe claims that Tarot is ancient or Egyptian. As far as we know it originated in Italy, with people at card parties sometimes pulling a random card from the deck just for fun.

Religious prohibitions against fortunetelling drove Tarot and other occult arts deep underground for more than a century. Today it’s an everyday thing, with human and electronic oracles and readings available 24/7. The contemporary Tarot boom, now with hundreds of decks available, begins in the early 1970s, alongside a resurgence of interest in astrology and general mysticism.

Besides Rider-Waite and Marseille, decks very much favored by professional readers include the Thoth deck, developed in the 1930s by Aleister Crowley, Golden Dawn occultist, and painted by Lady Frieda Harris, who helped fund the project. Fans call the Thoth deck “more spiritual” than Rider-Waite. The circular Motherpeace cards, created in the 1970s by two American feminists, use matriarchal and goddess imagery. Oblong cards can appear in a spread either upright or upside-down (reversed). With round cards, a true innovations, every degree of tilt to the left or right adds shades of meaning. 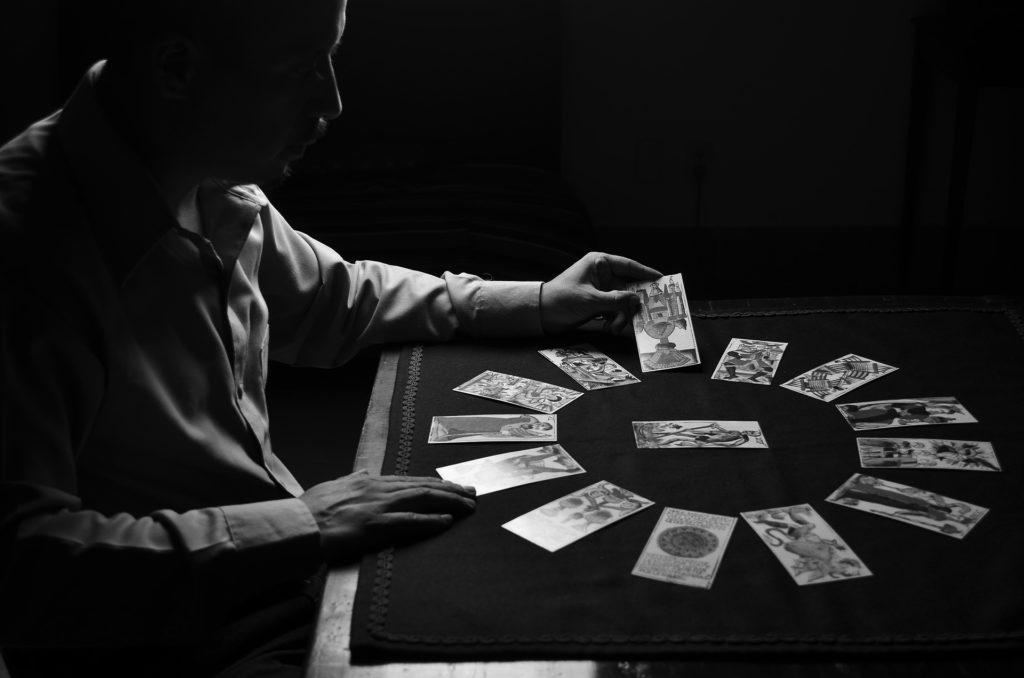 There’s One for Everybody

Real Tarot decks have 78 cards, four suits and 22 Major Arcana cards. If not, they are oracle cards, not Tarot. The Angel Therapy deck has 44 cards; it’s an oracle. Same with the Angel Answer cards, or the Ascended Master Oracle cards. Cards like these can be inspirational or thought-provoking, but are not useful for divination.

Now there are Tarot decks styled for every preference. If you’re fond of cats, choose from the Mystical Cat Tarot, Medieval Cat Tarot, Tarot of the Cat People, Marseille Cat Tarot, CatTarot, or Bleu Cat Tarot, all with 78 cards. The playful Tarot Cards for Cats and the expensive licensed Hello Kitty Tarot from Japan are 22-card decks. Hello Kitty’s deck is in Japanese, of Major Arcana only, collectible although not good for readings. Dog Tarot is available for dog lovers, and Animal Wisdom Tarot is for people into animal energies but unwilling to settle for oracles such as Messages from Your Animal Spirit or Ancient Animal Wisdom. The Wild Unknown Tarot, also featuring animals, is a favorite with millennials. 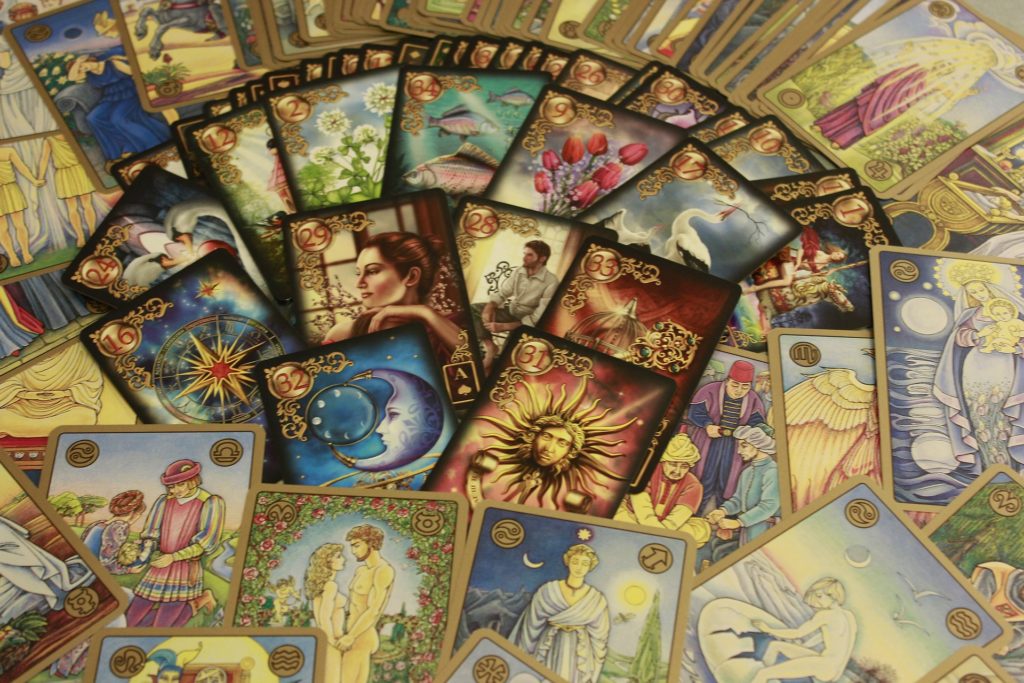 The Rare and Expensive

Surrealist painter Salvador Dali painted and collaged a Tarot series now called the Tarot Universal Dali. The cards are gorgeous. Dali pictured himself on the card The Magician. That deck costs $400. If surrealistic images appeal to you, try the Deviant Moon Tarot for $16. If you like Victorian/Art Nouveau illustrations, the Mythic Tarot is for you. The limited-edition, very collectible Rock & Roll Tarot Cards featuring musicians from the 1950s through the 1990s will cost you $500. In that deck, Elvis Presley is “The Emperor.” Unique, hand-painted or extremely limited-edition decks can cost up to a quarter of a million dollars depending on demand.

Other decks known simply for their beauty are the Tarot Illuminati and The Golden Tarot, both by the same artist. If the cards are too fancy or trying too hard to be cute or contemporary, like vampire Tarot cards or Housewife Tarot, the symbolism gets lost and the lines of communication from cards to reader to Seeker break down. We never want card images so impressive they outshine the purposes and values of Tarot.

Tarot’s entire validity resides in time-tested tradition. The card symbolism should work for every Seeker. That means don’t read Great-Grandma’s fortune from DC Comics Justice League Tarot (with images having little to no resemblance to the characters).

Every Tarot reader has a “pet” or favorite deck or two. Readers are most solidly tuned to the decks they use the most. Ask Tarot readers what deck they use when they read cards for themselves. When you have a choice, that’s the one you want.