Tarot readers are often available where astrologers aren’t. They need very little in the way of equipment or time to bring their clients answers: just the deck of cards. They must, of course, bring a lot of experience to the specialized art of finding lost things (or people) using Tarot cards.

Yes, finding lost things through Tarot cards has worked. How can this be?

All the 78 cards are symbolic. Tarot readers have learned to read the symbols. The basic ones are Wands, Cups, Swords, and Pentacles. Then there are the 22 Major Arcana cards, the famous ones like The High Priestess and The Fool. It is mostly the basic cards, which like playing cards are numbered Ace through King, that provide the most useful finding information.

On the spot, with Tarot you might be able to find lost keys, a ring or earring, a piece of paper, a phone, or see where a lost dog might be.

Because we are asking “Where is it?”, which is a simple question, a simpler spread than the classic 10-card Celtic Cross is most appropriate. The Celtic Cross tells a complete story, beginning to end; it takes too much time.

Different Tarot readers have different ideas about when and whether to winnow the deck of Major Arcana, the most powerfully symbolic cards usually representing people, especially if the object is small or belongs to oneself, or it is certainly inside the home residence. If the item was lost outside the home, the Major Arcana can indicate a person who has it or took it, or has further information about where it is.

Those in favor of using the whole deck, including Major Arcana, point out that these cards often picture locations such as a garden path, a courtyard, a road, a port, a cliff, a stream or brick wall. These they read literally.

Then there is controversy over whether all the cards should be dealt or read upright, with no reversed cards to complicate the issue. If it’s a simple question about a single object, we would vote in favor of dealing and reading all the cards upright. We think this will give a clear, uncomplicated answer. 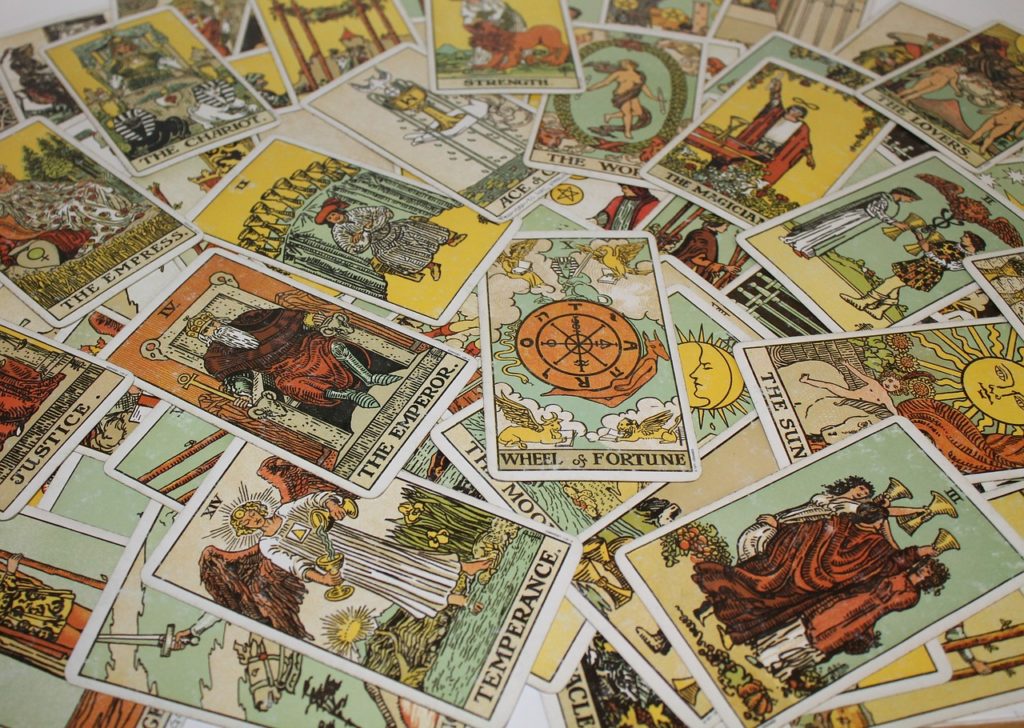 How to Lay Out Tarot Cards to Find Things

The more cards that are spread, the more information. Certainly we don’t want excess information, but if multiple items were lost and could be anywhere (as when a suitcase packed for a vacation is lost in transit), more cards are helpful. The question “What happened to the suitcase?” begs for a response in the form of a story or narrative.

The reader then turns face up the two leftmost cards. If face cards turn up, people were involved in its disappearance. Depending on the card it might have been a thief, or an official, or a worker. The card will show whether it was male or female, young or mature. This can help trace the last person who saw or handled the suitcase.

The two cards in the middle show what’s happening now. If, for example, one of those cards is the Two of Wands, which shows a man sending ships to sea, the suitcase is being accidentally shipped to a coastal location and is probably outdoors at the moment. If the card below it shows the juggler of the Two of Pentacles, whoever has the suitcase perhaps doesn’t know what to do next or is too busy to address the issue.

The two cards to the right represent the probable outcome. If The High Priestess card turns up her card can mean “I will not show you what happened. Your lost suitcase will remain a mystery.” If the Ten of Pentacles, which shows a family, comes up, a family with resources has the suitcase and chances are higher than normal that they will go to the trouble and expense of finding the owner.

Three cards allow the reader to access the answers to “What is it?” “Where is it?” and “When will I (or the object’s owner) find it?”

One reader lost a fine gold earring. The first card turned up showed a pile of jewels. That was right. The second card showed water flowing beneath a bridge. The third card turned up The Fool, the card numbered zero. The Fool has learned nothing from the past and doesn’t think about a future; he lives in the now. The reader immediately got up looked for the earring near sources of water in the house. She found it in her shower stall.

The reader first asks “What is it?” and pulls a card, and verifies that the lost object is somehow represented by or in the card. An Eight of Wands, a card associated with travel, might, for example, represent a lost plane ticket. The reader then asks “Where is it?” and pulls another card.

The card, the Nine of Swords, for example, shows a figure sitting up in bed, and so the first place to look would be in the owner’s bedding. If a search proves it is not there, we scrutinize the card for further clues. It so happens that the Nine of Swords shows the figure sitting up in bed in her nightgown in the dark, covering her face, apparently weeping. This might signal that the object will sadly never be found.

Tarot readers play this as a game and as practice. One person hides an object. The others each pull from their decks a “What is it?” and a “Where is it card?” and compare their conclusions about what and where. Which one of them will be the closest to correct?

Pulling a single card to get an answer from Tarot is always a high-stakes affair. The reader must ask the question clearly: “Where is Mary Ruth’s gold sweetheart ring?” And the reader must trust the deck. There is no relationship like a Tarot reader’s relationship with her favorite deck; reading after reading reveals that the cards communicate as if they were human. They can be abrupt, sarcastic, chiding, or speak in puns.

One Tarot reader tells about the time a friend came to her to ask where her lost dog might be. The card that turned up was The World. The card said nothing more specific. It seemed as if the Tarot thought the question was a silly one and gave the most obvious answer. The reader took it as a signal that the dog was still alive even if it would never be found.

The Cards Can’t Find It

When the Tarot cannot locate a lost object there are reasons:

We must always be prepared to hear that last sentence. The Tarot always answers us honestly. You asked an honest question; it has given its honest answer.